Finally a lightweight, compact, inexpensive and very easy to use astro tracker! Let’s discover the advantages and disadvantages of Move Shoot Move together.

But… what is an astro tracker?

Let’s go in order, we all know that the Earth rotates. Our wonderful planet takes 23 hours, 56 minutes and 4 seconds to make a complete rotation on itself. This means that, during this rotation, what we observe in the sky “seems” to move.

Like the sun and moon, the stars also move during this rotating cycle. This means that during a long exposure with our camera, we would get moved stars, or rather, we would capture their “apparent motion” as a result of the Earth’s rotation.
Usually, it only takes a few seconds of exposure before the camera “notices” the Earth’s rotation, especially if you use focal lengths of 20mm and up. As a result, we would be forced to make exposures no longer than 20-30 seconds to keep the stars sufficiently point-like in our shots.

How does it work?

The operating principle of an astro tracker is very simple. The rotation axis of the Earth passes almost through a star called “Polar”. By aligning the astro tracker with it, we have the possibility to rotate our camera at the same speed and inclination as the planet, triggering a real “tracking” of the stars. At this point, even if exposing for much longer, we will not get more “blurry” stars because the camera is moving in sync with the rotation of the Earth.
Simple, isn’t it?

So what is it for?

It is useless to explain that the longer an exposure the more light, color and details will be captured. The same goes for the sky, by exposing for minutes instead of seconds, we would be able to capture many more details of the Milky Way, as well as faint celestial visions, galaxies, nebulae and even clouds of gas. Moreover, by lengthening the exposure time, we are given the luxury of lowering the ISO sensitivity (so less noise) or even closing the aperture (so more definition) by a few STOPs.

The trade off is to repeat the shot for the foreground (or rather the Earth). Well yes, chasing the sky will have as a side effect the blurry Earth. In this case you just have to make a new photo by turning off the astro tracker and merge the two images with photoshop later.

The company offers several bundles, the one I recommend is the”Kit B” which includes the following:

Move Shoot Move 2-in-1 Star Tracker arrives home in an “armored” box. Once opened the package used for shipping, we’ll find inside the package containing the product. Of course, depending on the bundle chosen, the package and its contents may vary. 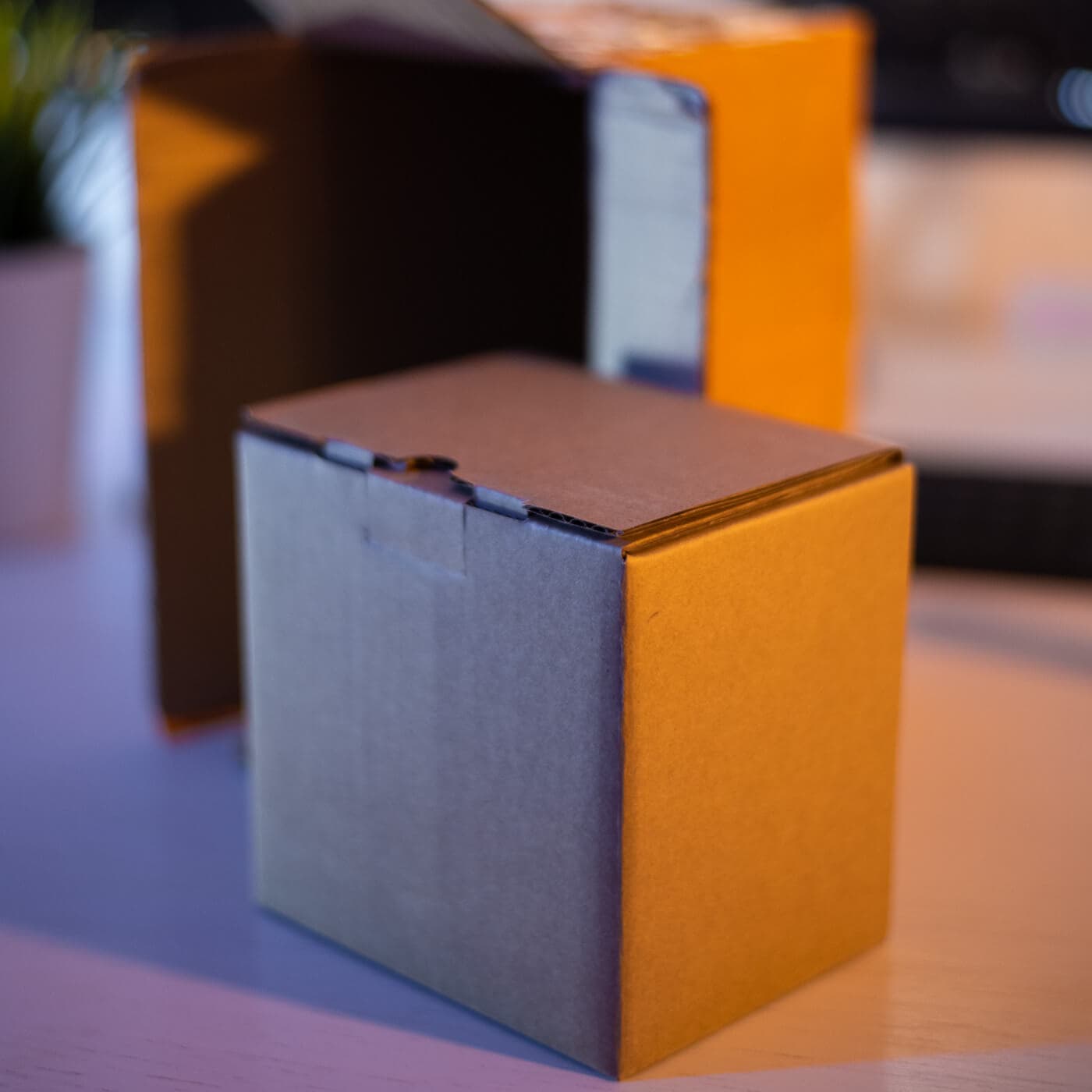 A plus of this astro tracker is its compactness!
Just think that the total weight is just 466gr and, taking into account that traditional models can go up to about 1Kg (not counting any counterweights), I would say that it is a peculiarity not to be underestimated especially for those who, like me, are used to going on trips and long hikes, especially in the mountains. 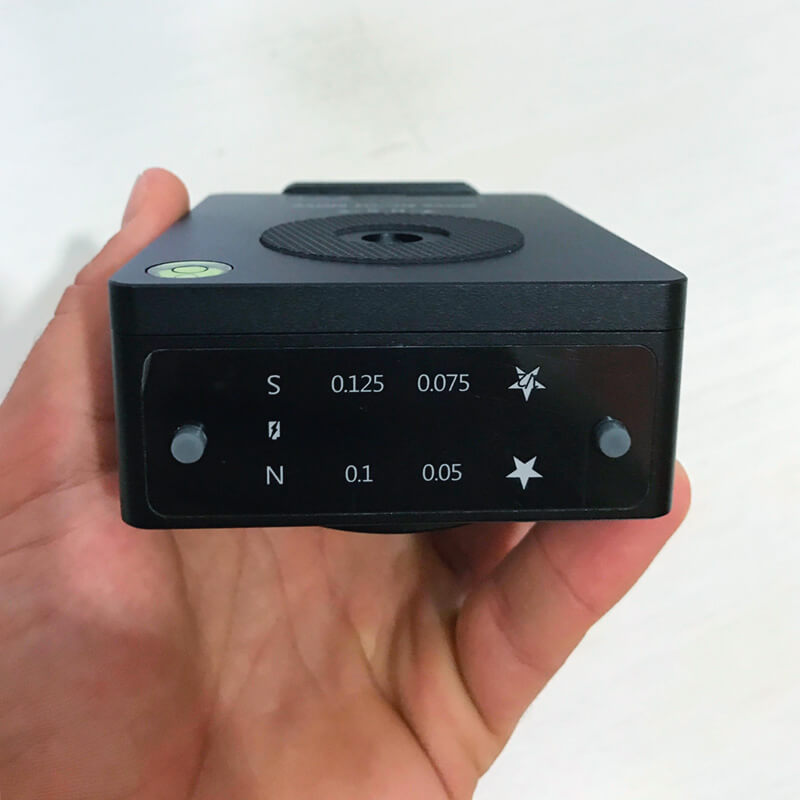 The dimensions are just as surprising!
Move shoot move fits in a pocket so it is easy to guess that you can put it in your backpack without worrying about its size.
The device itself is very easy to use. On top, there are a number of icons that show the various tracking speeds. You can easily switch between speeds by clicking on the left button. To turn on/off the tracker, just hold down the right button until the lights come on. There is also a South and North option, depending on the hemisphere in which you are located.
As a bonus, it also works as a rotary base for timelapse photography, both during the day and at night of course, but I’ll explain better later.

Move shoot move, can be configured in several ways, but here’s how I prefer to use it. I attach an arca-swiss sideboard to the bottom of the tracker. At this point I can attach the tracker to my ball head that I usually use on my FEISOL CT-3442 tripod.

At this point, you need a second ball head to connect the camera to the tracker. I personally use (and recommend) a Koolehaoda E3 mini, a small and light head but incredibly sturdy (it is completely made of metal). It’s useful to stay as light as possible not to strain the rotary engine of the tracker and this head seems to be made on purpose! 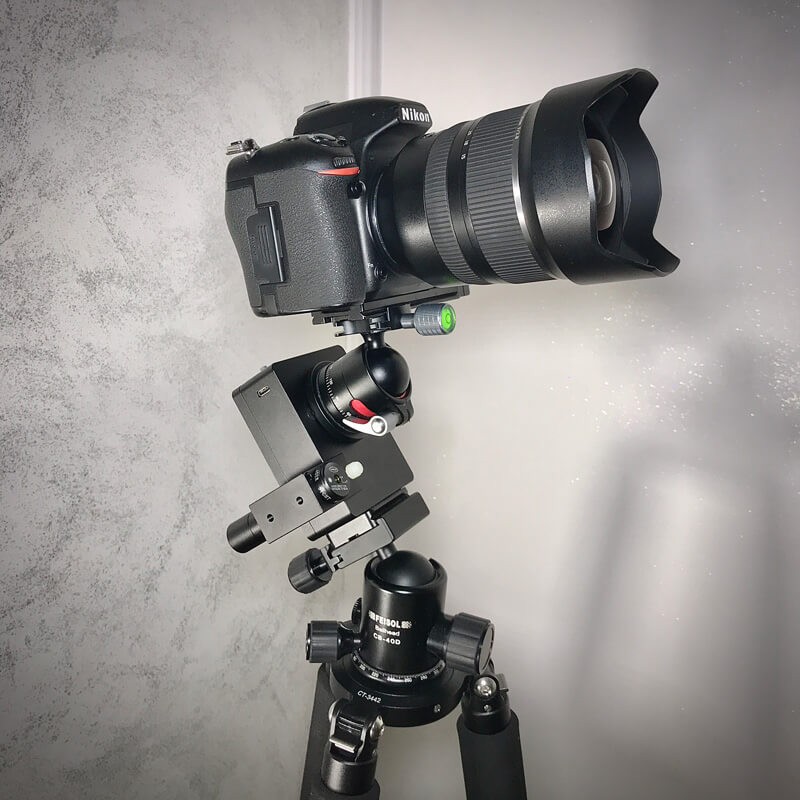 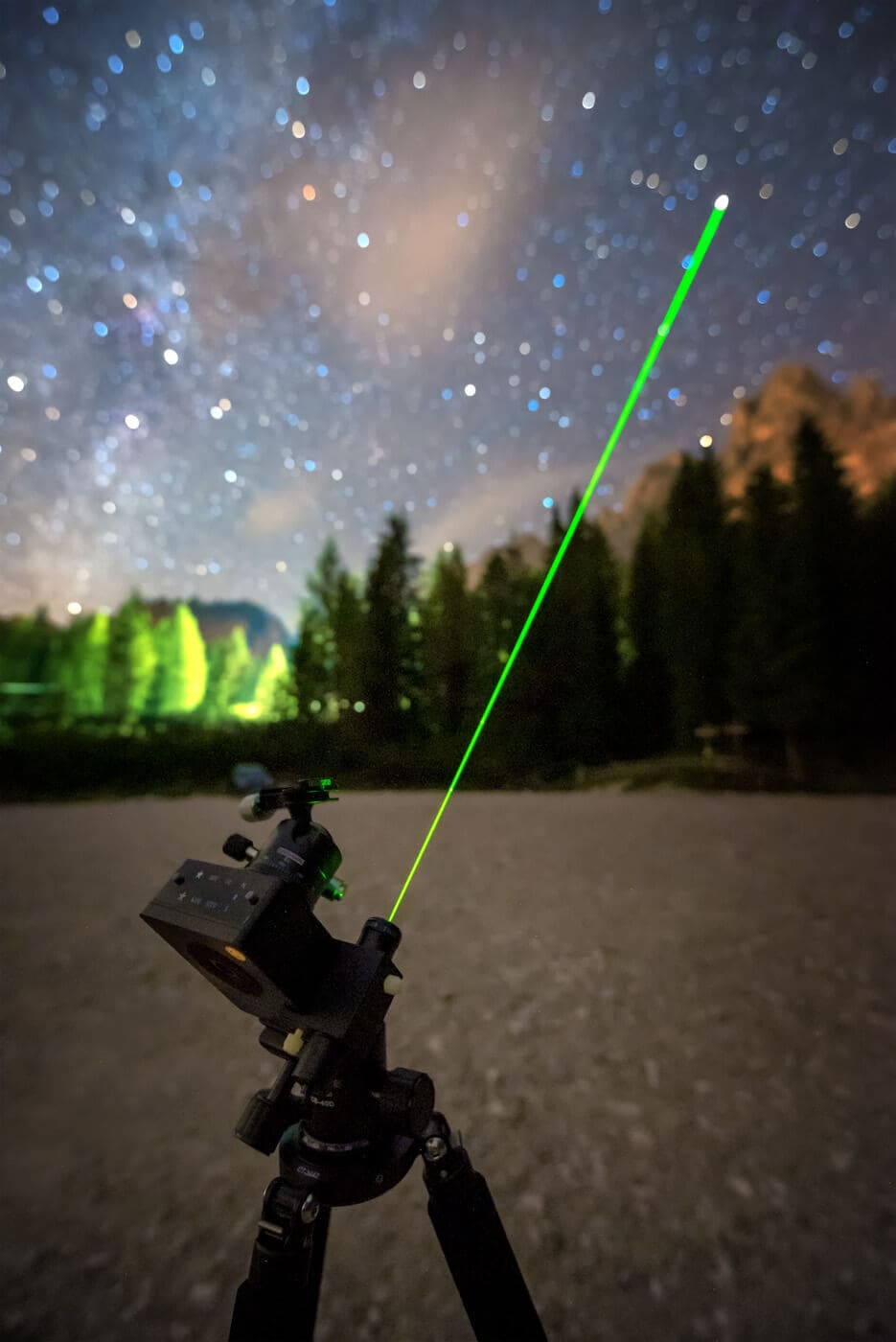 The product, comes with a very comfortable laser pointer (by purchasing the Base B Kit), which makes it easier than ever the correct alignment to the polar.
Simply engage the base with the pointer by means of the special bracket, turn on the laser, and align the light beam with the polar by moving the ball head. You’re done.
With other astro trackers, the polar alignment can be much more articulated as it is done by observing the sky through a small polar telescope. Often the telescope is not adequately backlit, moreover the stars appear enlarged and a movement of even 1mm can easily disorient, thus wasting a lot of time “looking” for the polar one. This can be a nightmare for those who are not very familiar, as well as difficult for the eyesight and uncomfortable.

There is a small thing to keep in mind. Apparently, laser pointers are heavily regulated in many countries. This is mainly due to stupid people who point lasers at people, cars and even airplanes and run the risk of blinding pilots. When using the laser pointer, it is a good idea to make sure to minimize the use making sure to turn it off in case of airplanes passing by.

After performing my quick polar alignment, I installed my Nikon D750 and the very heavy Tamron 15-30mm. This configuration is already very heavy, to the point of making me have doubts about the effectiveness of the small shoot move.

Usually trackers of this size are limited to about 1.5Kg maximum load, at least this is what is recommended by the manual. On top of that, I was a bit skeptical that this device could handle my heavy equipment, considering that the whole thing is about 2.7Kg.

After adjusting all the settings of my camera (ISO 1600, 3 minutes, f/2.8), I brought the focal length to 30mm and took a test shot. At the end of the exposure, I enlarged the image, and to my great surprise, the stars were sharp! An exposure of 3 minutes at 30mm! 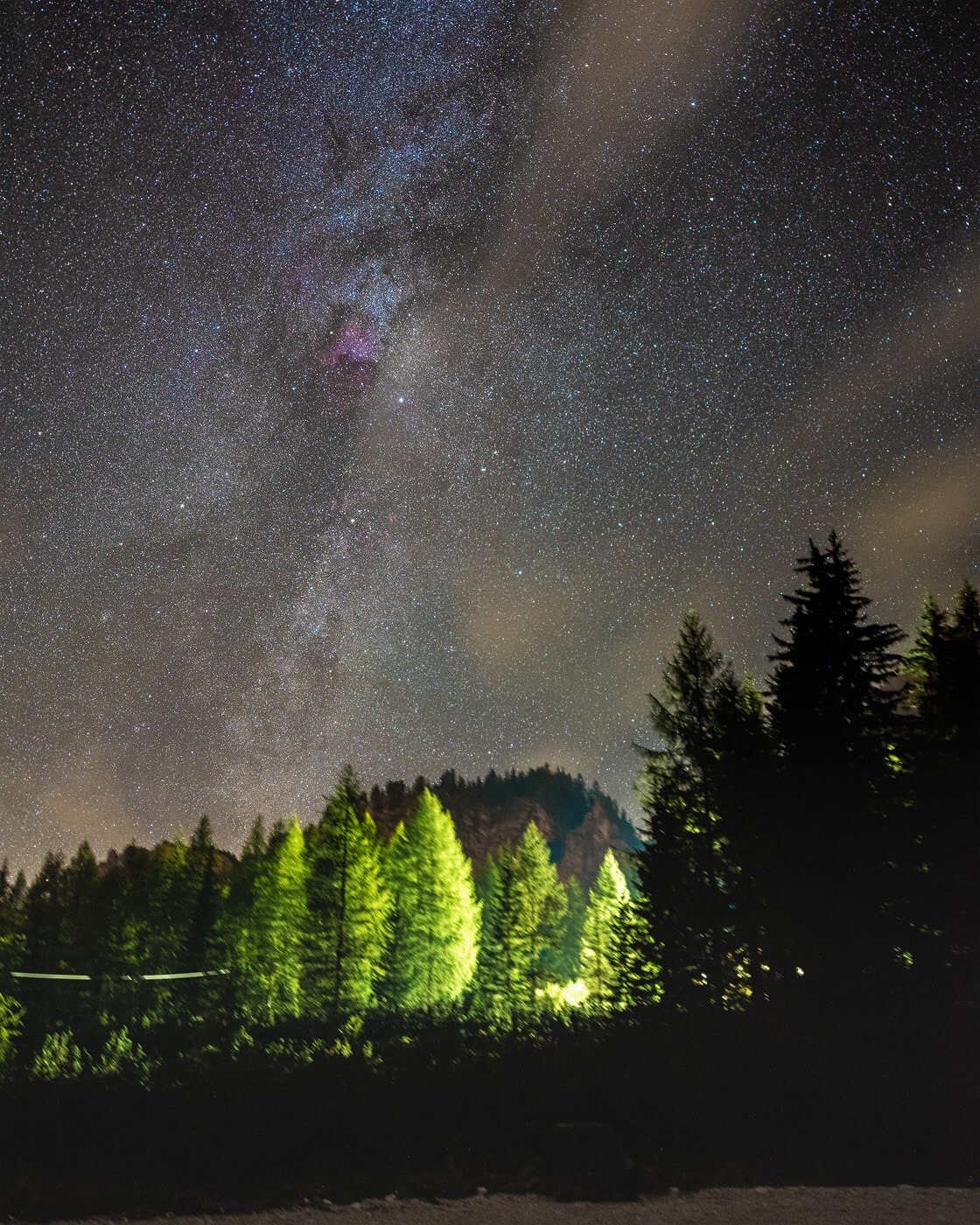 For time-lapse lovers, Move Shoot Move offers this integrated functionality. It is a mode that allows you to rotate the camera between shots while it is busy collecting an interval sequence of images.

Of course this is a function completely independent from astronomical tracking and, therefore, it can be used both day and night. It is possible to set the rotation speed by means of the appropriate button while the position can be set at will for both vertical and horizontal time lapse.

Although fascinating, personally I do not make many timelapses, however I wanted to test this feature. The location in question is the famous and beautiful Lake Braies, in the heart of the Dolomites.

I hooked Move Shoot Move directly to my tripod by removing the main ball head and levelled the tripod with the help of the integrated levelling bubble on the same tracker.
Then I installed the reflex camera on the move shot move using the ball head, connected the synchronous cable (it allows to rotate the astro tracker during the interval), and set the correct shooting parameters.

I have tried most of the best known astro trackers on the market, I can say with certainty that Move Shoot Move is a fantastic option! I would recommend it to anyone who wants to start taking better astronomical photos without worrying about weight and bulk!

If you have never used an astro tracker, know that it really helps a lot. The main problem we face at night is simply the lack of light. Exposures of 15-30 seconds will never capture enough light for a clean, detailed photo. That’s why so many astronomical images are grainy and ugly. With a tracker like Move Shoot Move, however, you can easily capture exposures over 4 minutes with a wide angle lens. If you think about it, a 4-minute exposure captures 16 times more light than a 15-second exposure! This extra light is what allows me to capture the extraordinary colors and details in my astronomical photos. 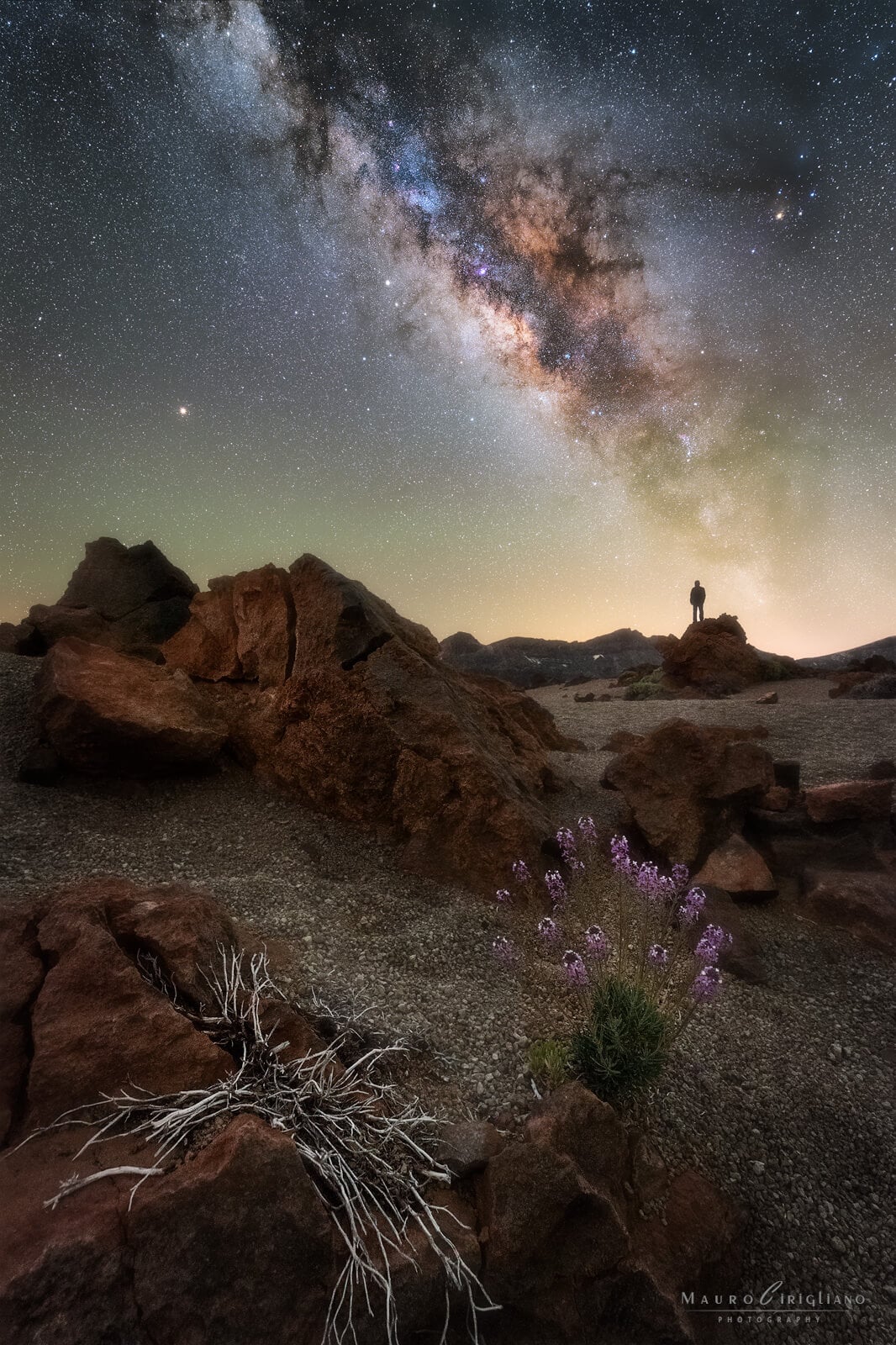 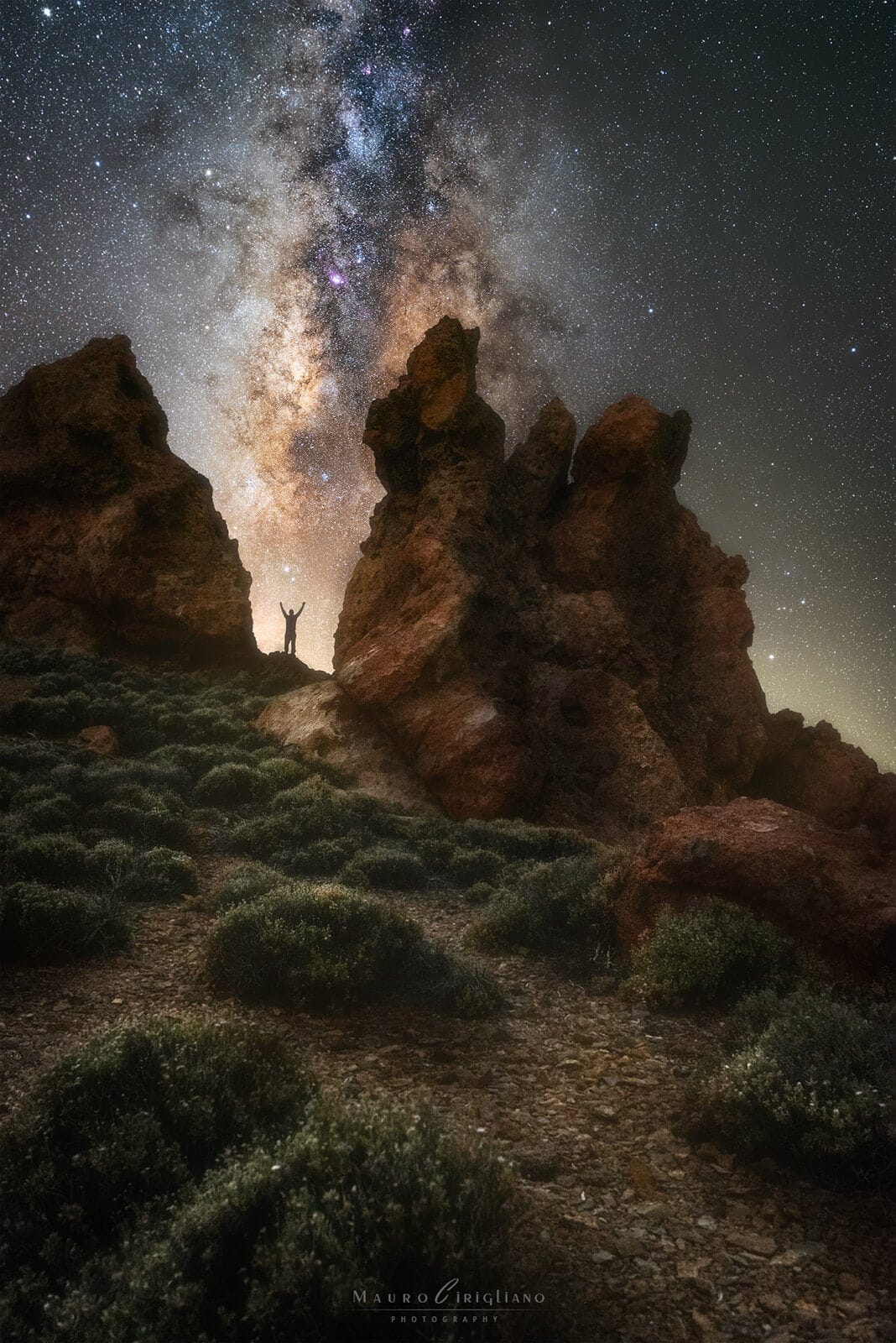 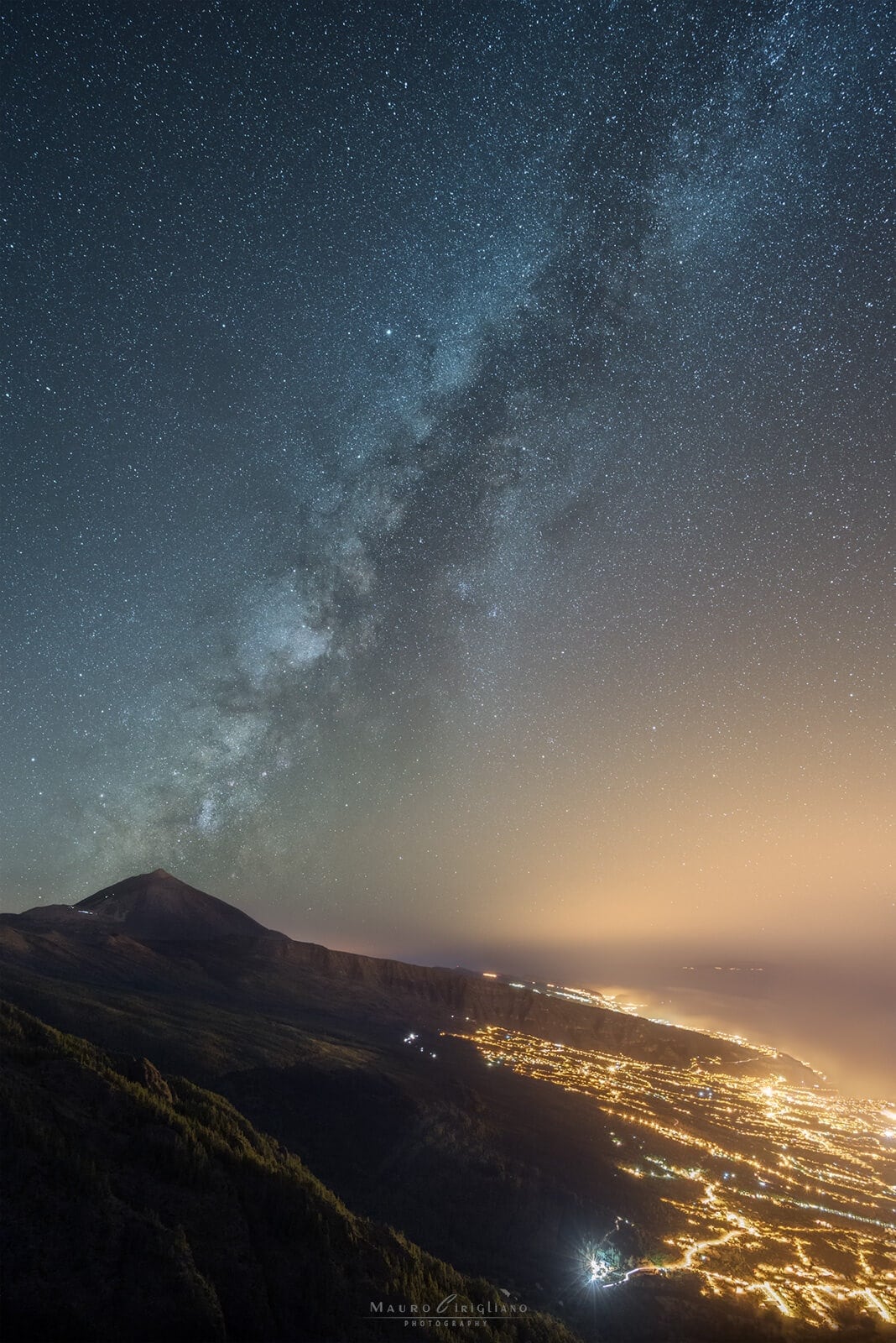 Move Shoot Move is by far the smallest, lightest, most portable astro tracker on the market. The famous Star Adventure Mini is even more cumbersome and think, and what’s more, it has to be connected to an app (via smartphone) to work, because it has no physical buttons. Therefore, personally I don’t like to use Star Adventurer Mini (I exclude the standard version).

Of course, like all things, Move Shoot Move also has some small disadvantages that I want to report. First of all the battery, according to the website, lasts only for 5 hours. This time is relatively short for an astro tracker. For example, my SkyGuider Pro can shoot without problems for 20 hours with its rechargeable lithium-ion battery.

Normally I spend more than 5 months a year traveling across the country and I don’t always have an electrical outlet at hand. One of the main annoyances of this lifestyle is the batteries! Every day I worry about charging the batteries of my Reflex, smartphone, notebook, the same power bank that I carry with me, etc … Therefore, I’m not thrilled to have another battery to worry about, especially if I know it will last only 5 hours (probably much less on a cold winter night).
Another factor to take into account is the load capacity. Although it has managed to achieve very good results despite its size, this astro tracker is not suitable for those who want to delve into pure astrophotography (deep sky) using oversized (and heavy) focal lengths. Unless you want to photograph nebulae or galaxies from 200mm and up, Move Shoot Move will give a lot of satisfaction in making night landscapes using wide angles.

Thank you Move Shoot Move, for giving me the opportunity to test this wonderful product. I became a happy user of it because with great surprise it proved to be effective and reliable, but above all, light! Finally I can make long hikes in the mountains without carrying extra weight on my shoulders! (not to be underestimated).

With this review, I simply wanted to present this product, explaining its strengths and weaknesses, based on my experience of use. If you decide to buy Move Shoot Move, I recommend the “Basic Kit B”, which includes the laser pointer. They have other bundles available, but I think Basic Kit B is the best option for most people, especially for beginners.

Also, by entering the discount code “MAU” during the checkout phase, you will be entitled to a discount bonus, take advantage of it!!

If you need information about the use or have any questions, write me at any time through the contact form of the site, or on my social channels.
If you are interested in buying it, you can visit the official website Move Shoot Move through this convenient button. By entering the discount code “MAU” during checkout, you will be entitled to a great discount, take advantage of it!!!
MSM WEBSITE

If you’d like to learn more about Move Shoot Move, find out how to use it and learn how to get the most out of it, check out the handy Tutorial I’ve written for you!